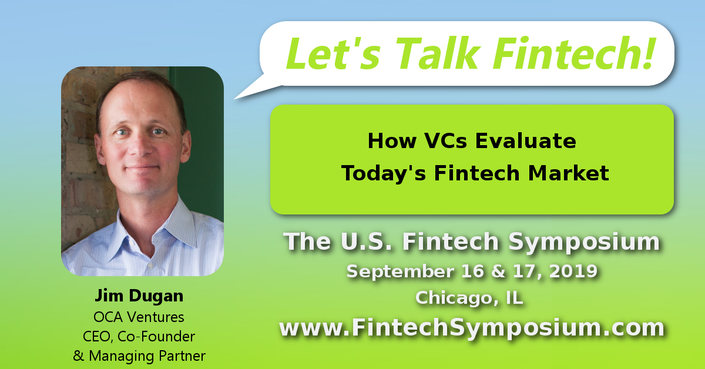 Presentation Description:
In this presentation Jim Dugan will discuss how venture capitalists view the fintech industry and how they evaluate fintech startups.  This presentation will explore which specific fintech opportunities are gaining the most interest, where there are opportunities for new fintech solutions and how financial institutions can work with fintech startups.  Furthermore, since most financial institutions have to evaluate their fintech "buy, build or partner" strategies, it's important for them to think like a VC. This presentation will discuss how VCs evaluate various fintech opportunities and how their investments can serve as a "spot filter" to focus on specific fintech solutions.  Finally, Jim will explain how financial institutions can collaborate with venture capital firms to discover what's next in terms of fintech innovation trends.

Jim has over 25 years of corporate finance, capital markets, and venture capital investment experience. Prior to forming OCA Ventures, Jim traded derivatives at the Chicago Board of Trade and worked in corporate finance with Continental Bank. While at Continental Bank, Jim participated in the structured financing of companies ranging in capital size from $10 million to several billion dollars and in the formation of a $150 million subsidiary to fund mezzanine debt and equity financings.

Jim received a BA in Economics from the University of Rochester and earned his MBA (MM) from the JL Kellogg Graduate School of Management. In addition to his responsibilities at OCA Ventures, Jim is a founding member of the Illinois Venture Capital Association (IVCA), where he formerly served five years as Treasurer, Director and member of the Executive Committee and was the 2013 Fellows Medal recipient. Prior to serving as Treasurer, Jim was the Chairman of the Legislative Committee for the IVCA, in which capacity he helped establish HB 3212 as Illinois law.

Jim is a frequent guest lecturer and panelist at Northwestern University’s Kellogg School of Management and Chicago Booth GSB. Jim is also a charter member of Tie Network Chicago and Co-Founder/Treasurer of www.SmartBet.org.

In his free time, Jim serves as a Regional Ambassador for the United States Olympic and Paralympic Foundation, and coaches travel girls lacrosse in the suburbs of Chicago.